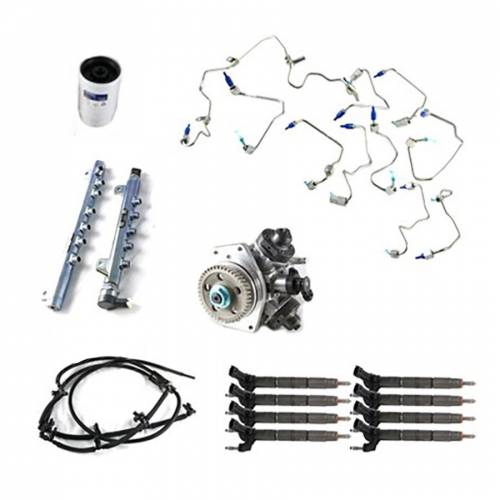 If your one of the 3% that experience a CP4 failure on your Duramax, its extremely important to replace not only your CP4, but also its counter parts.

After a catastrophic CP4 failure small metallic debris is spread throughout the entire fuel system. Its nearly impossible to recover or flush all that debris out of the remainder of the fuel system. These small, sometimes microscopic pieces of metal can and will cause repeat failures if not removed. In addition to some fuel system flushing, GM and DHD recommends you replace all of the high pressure fuel system components. DHD's comprehensive repair kit contains all the parts recommend by GM plus some recommended by the tech's here at DHD.

GM has recently put a core charge in place on the CP4, (8) Injectors and LH/RH fuel rails that we use in this kit. In then event you'd like to avoid the core charge, please select the return first option when placing your order.